Hockey Canada has mandated that all minor hockey associations implement half ice programs for all players U9 and under.  It is a structured, learn-to-play hockey program designed to introduce beginners to the game’s basic skills. It enables participants to become contributing members of a team effort, develop self-confidence, and experience a sense of personal achievement. These goals are achieved in an atmosphere of fun and fair play.

The main goal is to make the beginner’s first impression of hockey a good one! When players get started on a positive note, they automatically enjoy the game and usually go on to have fun playing hockey for many years.  Putting young players into a competitive environment too early will compromise the child’s development. Children should only be placed into competitive situations that suit their abilities. It is important to fully understand and appreciate the benefits of cross-ice hockey and why Hockey Canada has a national policy ensuring all Initiation level hockey is played in smaller, modified spaces.  Hockey Canada views Cross Ice Hockey as a key component of its Long Term Player Development Model.

Half-ice games in hockey are about more – more fun, more puck touches, more passing, more shooting, more time playing … and more opportunities for young players to develop!  It is clear that half-ice hockey helps develop the finer points of hockey, and will benefit players in the long term.

Is this “real” hockey?

This type of implementation is no different than what soccer does (by offering a shorter field) and basketball does (by lowering the net).  You wouldn’t need your child to ride an adult bike to call it “real” bike riding.

What are the core requirements of the Game Play Model?

The model was designed to maximize the opportunity to get all players into the game. The core elements are running time, continuous play on shift changes, no offside, icing or face-offs after goals, and when penalties are called.

How will player development be affected if there is no offside or icing called during game play?

Learning offside and icing will come in time, but the primary focus on age-appropriate training and programming needs to be on skill development in skating, puck control, passing, receiving and shooting. Concepts like offside, icing, positional play and face-offs can be introduced at a later age when players move to the full-ice model in the transition to U11 hockey.

Is it a requirement to use a blue puck instead of a black puck, and what are the advantages?

The regulation black puck weighs six ounces, while the blue puck weighs four ounces. Scaling down all aspects of practice and game play for players is very beneficial. The blue puck is an appropriate weight in relation to the height and weight of young players. Use of the blue puck can promote proper mechanics in shooting, passing and carrying the puck.

Should half-ice hockey be tiered?

Grouping of players of similar ability can set young players up for success and enjoyment. The focus of the half-ice Game Play Model is player development. It is important in both station-based practices and in half-ice game play that players be grouped by similar ability levels whenever possible. It is recommended that prior to the start of half-ice games, coaches may wish to discuss possible line combinations to ensure the skill level of the players on the ice is similar; this will allow more puck touches and fun for all players.

What are the dimensions of a half-ice hockey game?

What are the advantages of practicing in small areas and playing half-ice games? 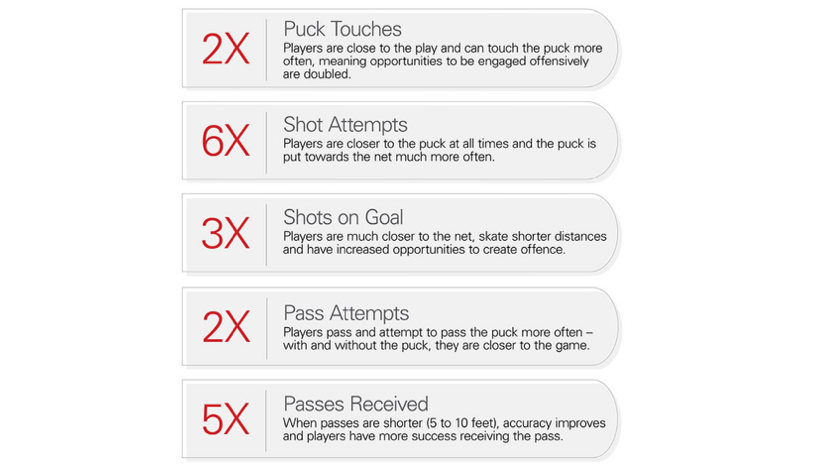 Small spaces mean more engagement in the play and more activity. Through small-area, station-based practices and half-ice games, players are closer to the play at all times and have more opportunity for puck touches. Regardless of the skill level or the ability of each player, opportunities to be engaged in the play are doubled when the playing area is smaller. NHL research has illustrated that all skill areas of the game increased substantially when players played in small spaces more suited to their age and skill level.  A Hockey Canada study has shown that there are substantially more opportunities to touch the puck with a smaller ice surface for our players.

How long are half-ice games?

The game time established for the half-ice model is based on a 60-minute ice session and is structured to ensure there is time for a short warm-up, two halves of play and a short break between the two halves to make any adjustments that need to take place.

Is the length of a shift limited to 60 seconds?

The shift length of 60 seconds is a recommendation. Shifts may be up to a maximum of two minutes at the discretion of the coach.

What about my kid who is a strong skater?

We believe that the half-ice model will help our strong skaters be an even better skater by teaching him/her how to maneuver in the corners, learn to accelerate quickly and start and stop as required to handle the puck.  Traditional skating skills will still also be developed as part of weekly practice sessions.

Are teams permitted to identify a full-time goaltender?

All players should have an opportunity to play goal in full goalie equipment. Players should rotate through the position throughout the season. The Hockey Canada Long-Term Player Development Model encourages a wide range of skill development at a young age, and focusing on a single position may limit the opportunity to practice skills in all areas.