Presenting our A and Gold Division Champions 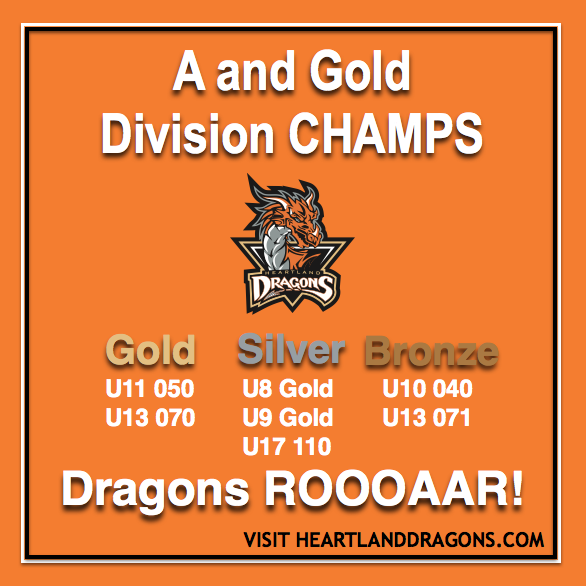 What a hockey season!  The pandemic has forced several changes to behaviour and routine, some for the better. Families spent more time together and people slowed down. Working remotely has become the reality for many people, and advancements such as Zoom have proven to be game-changers.  If something good is to come out of this pandemic hockey-wise, it was that we as an organization survived due to the overwhelming dedication of our Coaches and Volunteers.

Our outstanding group of Coaches and Volunteers continued to develop our Players against imposing odds, adapting quickly and effectively to the constantly changing environment.  There were some bumps along the road, but you, our players shone the brightest!  No matter what COVID threw your way, you remained positive, smiling at every turn.  Often playing to few or no fans, but for the thrill of the game.  Your diligent work and commitment paid off as evidenced with your Division Championship success.

Congratulations are in order and calls for celebration can be heard far and wide. Each team has shown the true signs of resolve, determination and sportsmanship.  Whether you have won in the past, achieved success this year or for those that have dreamt of winning.  Keep up your positive spirit and enjoy your successes and we will see you all again next year!

Again our heartiest congratulations to all! 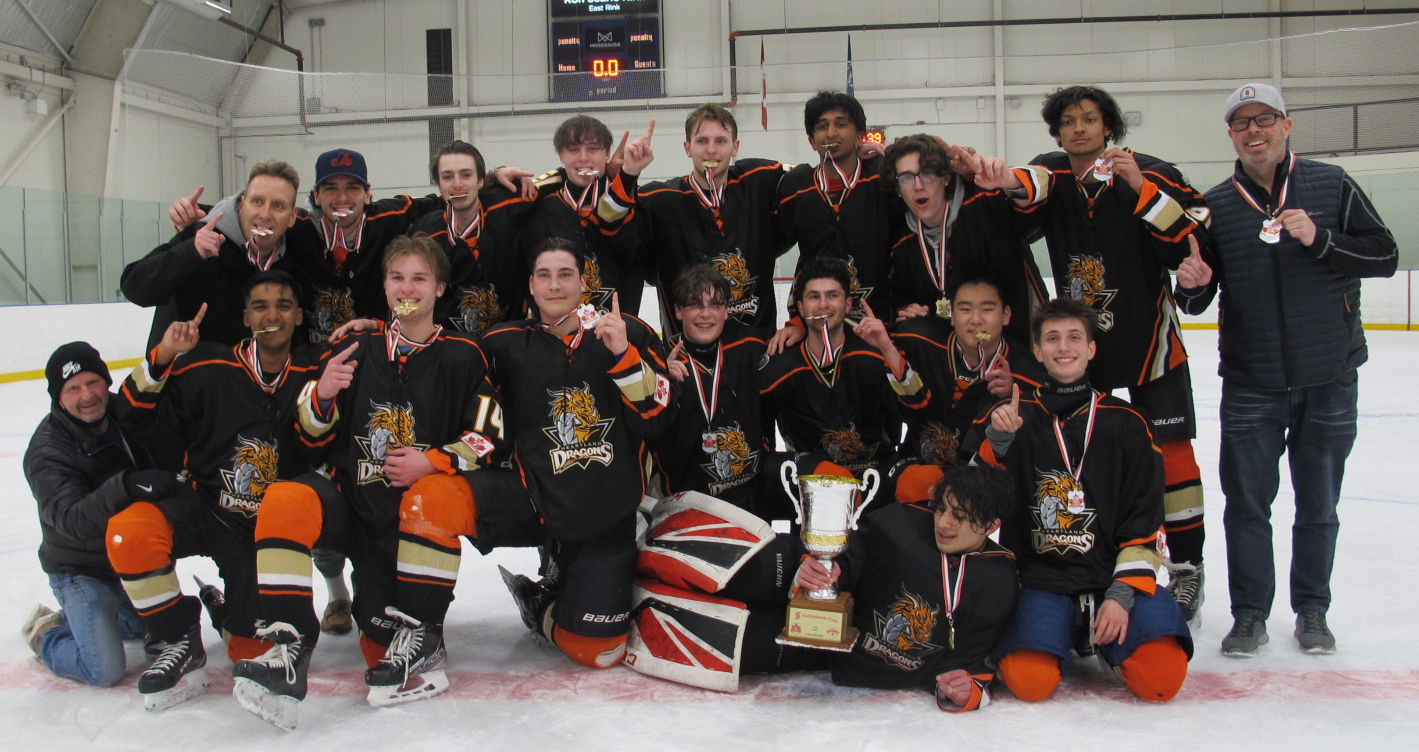 This past weekend wrapped up an incredible year of hockey and for most an end to their minor hockey career. The Dragons Team 114 (U18) had a tough year due to Covid (as did everyone), but overcame all obstacles and finished 1st in the regular season, 1st in the round robin and won an exciting semi final in a shootout and the final with 4.1 seconds left.

This team is special as the majority of these young men have all played on this team for over 10 years (as well as the coaching staff) and many could have played at a higher level, but chose to stay together for the friendships. Isn’t that what hockey is truly about? I am so glad the hockey gods blessed these boys with a Championship in their final year. A special shoutout to the families of these kids, as it was your support for them throughout the years and especially this one kept us motivated and driven. The long lasting friendships that were created over the last decade will stay with everyone to the end of time. 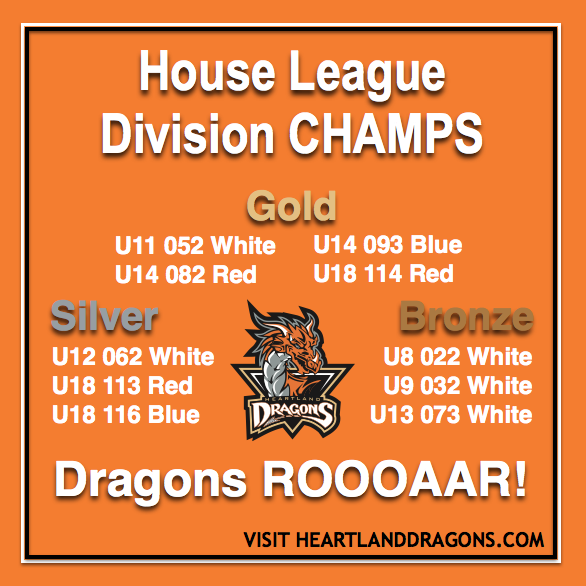 What a hockey season!  All teams should be very proud of not only their accomplishments but the manner in which they were achieved. Overall, we have had a great season with many teams being successful in their play downs, playoffs or in tournaments. We had an outstanding group of coaches and volunteers who helped to ensure that all players enjoyed their Heartland Dragons Hockey experience. As an Association, we can look back with great pride on each of our teams’ successes and growth this season.

There were some bumps along the road, but you, our players shone the brightest!  No matter what COVID threw your way, you remained positive, smiling at every turn.  Dressing in hallways or even riding to the rink already dressed in your hockey gear.  Sometimes playing to few or no fans, but for the thrill of the game.  Your hard work and commitment paid off as evidenced with your Division Championship success.

Each team has shown the true signs of resolve, determination and sportsmanship.  Whether you have won in the past, achieved success this year or for those that still dream of winning.  Keep up your positive spirit and enjoy your successes and we will see you all again next year!

Again our heartiest congratulations to all! 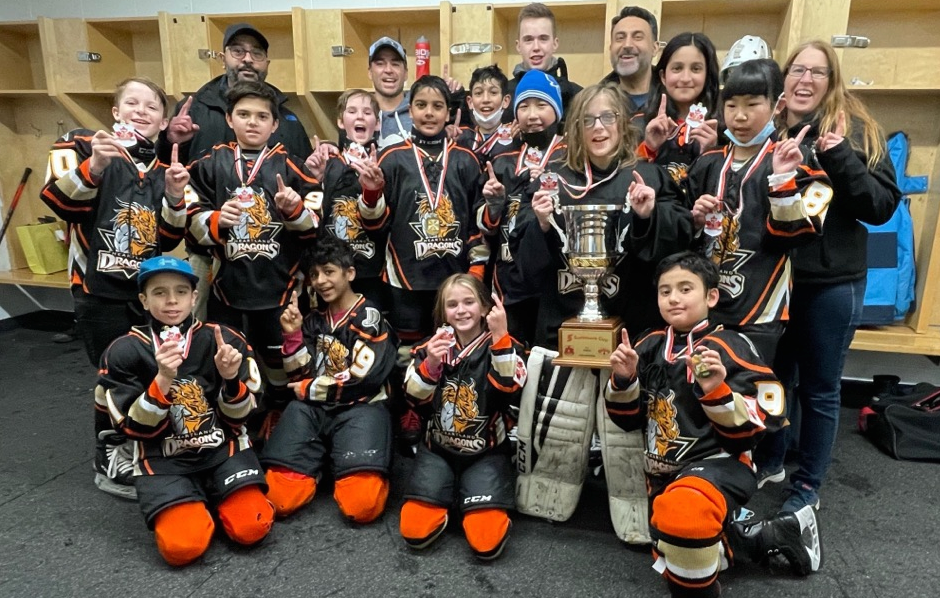 From lemons to lemonade!   Last weekend, the Heartland Dragons won the U11 White MHL championship team by beating #1 seed George Bell 3-0 in an action packed final.   During the year this team overcame much adversity including losing its first 7 games in a row, being dropped a division, playing with a short roster, and a new head coaching change mid season.    However, this resilient group banded together and would only lose 2 games from December all the way to their championship run last weekend.    Along the way they also captured the title at the Kevin Fegan Memorial tournament in St. Catharines by going undefeated and amassing almost 7 goals a game and less than 1 against.      What a terrific season turn around, way to go Heartland Dragons players and coaching staff!    Go Dragons Go!

The U14 Red Heartland Dragons team scorched their competition to bring home the cup! 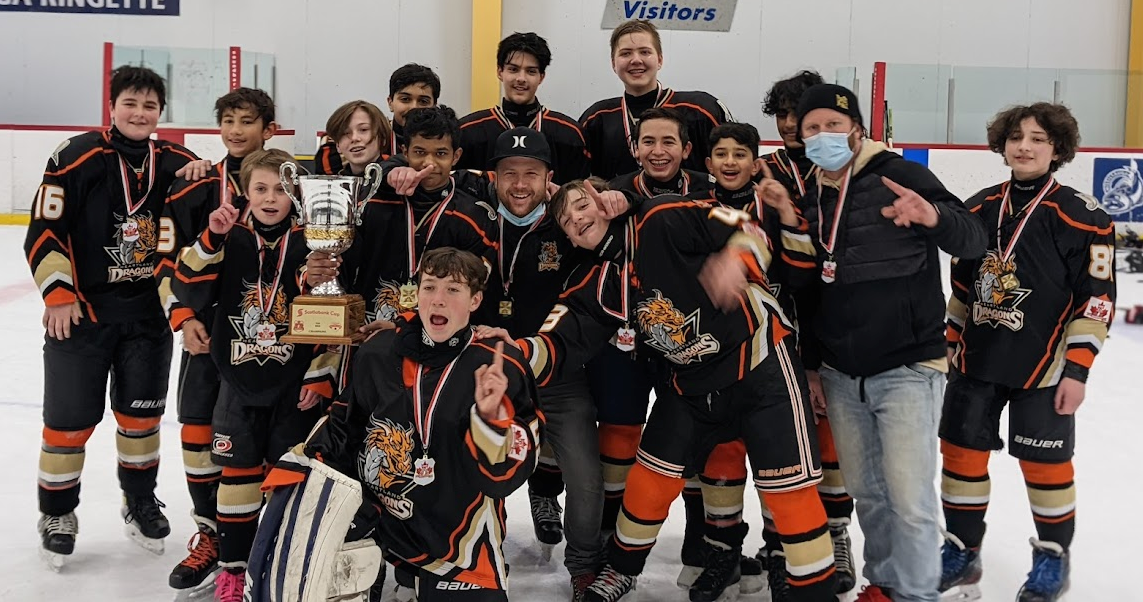 April 2, 2022. The Heartland Dragons U14 Red team had to go against the West Mall Lightning to advance to the finals. Having been beaten by West Mall in the first-round robin playoff game these Dragons had everything to prove; they were not going to be in that 3rd place game. “The Boys” started slow in the first period falling 1-0. When they started to play “their” game, their true colours started to show. Steamrolling through West Mall 7-1.

April 3, 2022. Now having to go on to face the undefeated George Bell Titans who were the defending champs in their league the pervious year. These Dragons had a taste of victory, and nothing would stop them till they would raise that cup like they did in Bradford. “The Boys” battled hard and fought every inch of the way with a 0-0 score at the end of the third period going into overtime. “The Boys” have been here before and knew it wasn’t going to be easy. When that overtime goal went in nothing, but sheer heart, grit, teamwork, and their love for the game got them the win.

What are we? FAMILY!

Who are we? DRAGONS!

The Heartland Dragons U14 Red team captured the title at the Bradford Blue & Gold Classic RS Tournament on March 20th. 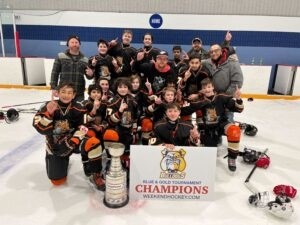 These warriors battled their competition to the end. Going undefeated in the round robin and having to face Markham Waxers in the finals. “The Boys” let the first game lead slip when they were up 1-0 on Markham that resulted in a 1-1 tie. They would see each other again in the finals. Going to three (3) overtimes from a 5 on 5, 4 on 4, 3 on 3, and finally with The Dragons winning in a 2 on 2 claiming the cup.

On March 6th the Heartland Dragons U11 White team seized GOLD at the Kevin Fegan Memorial Tournament in St. Catharines! The team thrilled their fans by dominating every single game and amassing an amazing 36 goals for and allowing only 4 against, including an 8-1 victory in the gold medal game. Great sportsmanship, teamwork and fun were had by all. 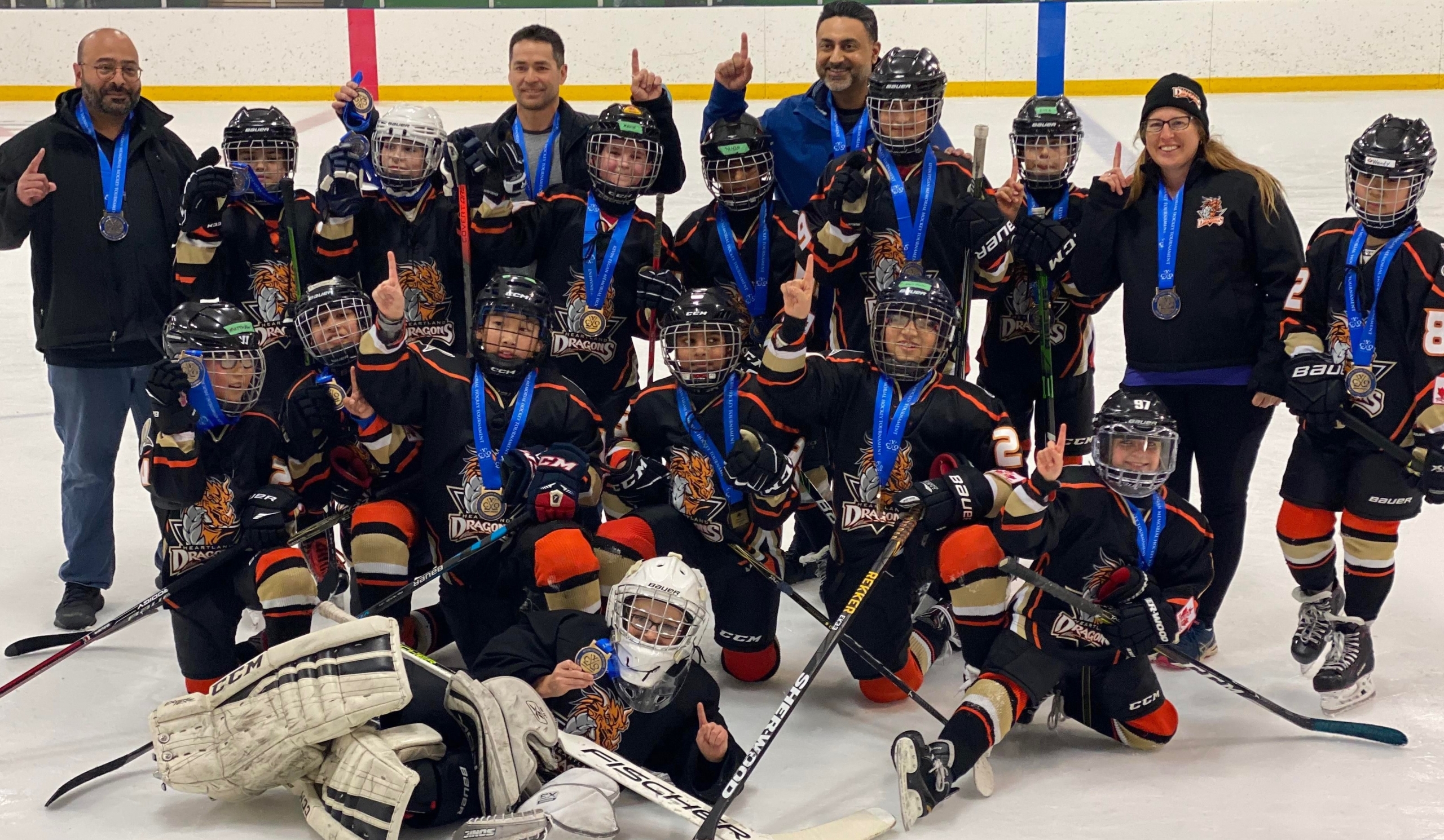 On February 27th the Heartland Dragons U9 Gold blazed through their competition undefeated to
win the Humber Valley Sharks Attack Tournament! 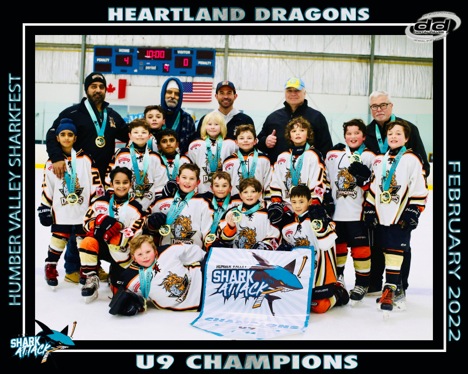 On February 27th the Heartland Dragons U9 Gold blazed through their competition undefeated to win the Humber Valley Sharks Attack Tournament!

Giving up only one (1) goal over six (6) games to champion an auspicious weekend of indomitable team spirit, fun and friendship, while also maintaining their commitment to their regularly scheduled league games on both Saturday and Sunday.

Eight (8) games in three (3) days – a tiring but rewarding weekend!

The Heartland Dragons Hockey Association applauds the teams dedication to player and skill development.  Congratulations to the players, coaches and parents!  Clearly hard work, planning and a great team effort can lead to amazing results.

U10 “A” Dragons Win the Orangeville Fall Classic Tournament!

On November 28th the Heartland Dragons U10 “A” amazed their friends and family with an
auspicious beginning to their 2021-2022 hockey season.!
After a less than rousing start to the regular season, the Heartland Dragons U10A made great
strides over their last 4 league games. After playing two regular season games back to back, the
U10A Team headed out on Friday November 26th to participate in the Orangeville Fall Classic
Tournament.

In the round robin segment of the tournament, the team finished 2-1 with an amazing breakthrough
in the third game securing them the first place position in their Division. They entered the semifinals
playing their sixth game in as little as four days to demonstrate the true testament of
toughness, persevering through mental and physical tiredness, to earn them a 2-1 win to get them
into the Finals.

In the Championship game, the U10A Team spent a gruelling 8 minutes of successful penalty
killing to end the 2nd period in a one all tie. Two minutes into the third period the Heartland
Dragons U10A pulled away with a go ahead goal and shut down their opponents for the remainder
of the game!

This was the first ever Rep Level Tournament for this group of young players who came from
House League just two years ago, and who have only just recently being exposed to the
fundamentals of how to play positional, full ice hockey.  What a wonderful accomplishment to now be crowned Tournament Champions!